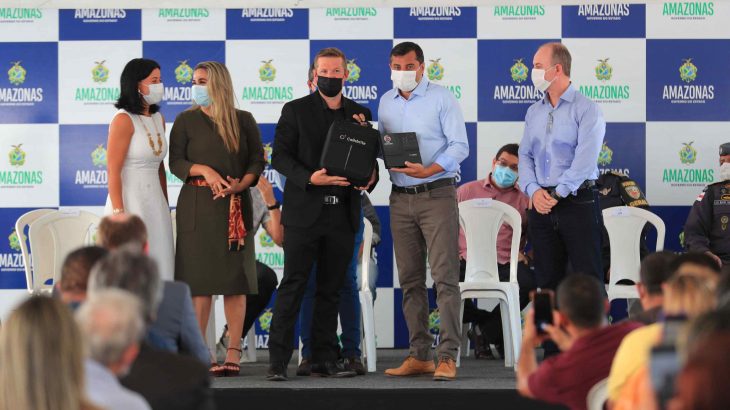 MANAUS – Aiming to strengthen and contribute to the public safety of the State, the governor of Amazonas, Wilson Lima (PSC), delivered on the morning of Friday, 3, in the Arena da Amazônia, south-central zone of Manaus, two devices, worth R$ 200 thousand each, which will assist in combating human trafficking. Besides this, 32 new vehicles were delivered to patrol the countryside.

The equipment given to the State Civil Police (PC-AM) were donated by the Non-Governmental Organizations (NGOs), Cellebrite and The Exodus Road, which specializes in combating human trafficking, pedophilia and sexual exploitation. According to the state government, the equipment will be used in the extraction of data from cell phones for the elucidation of crimes, especially in the fight against human trafficking.

“Everybody knows the difficulty that we have here in the state of Amazonas regarding human trafficking that is a silent crime, we have done a very significant work in this sense to be able to combat this crime, this was also a determining factor for this NGO for us to receive this donation to assist in this work that is already done by our police”, said Wilson Lima.

The equipment donated to the State will extract data from cell phones that will be passed on to the police. Called Cellebrite Premium, they are valued at R$ 200 thousand each. The mechanism will allow access to deleted data messages by Android and IOS systems, which are used in Iphone. The tool has already helped in the investigations of Operation Lava Jato.

“The equipment will stay here in the capital and will be part of our intelligence sector equipment collection, so we have these cell phones that are seized in the interior and they come to the capital to be able to extract the necessary information for investigations. We will receive training from the company responsible for this equipment so that we can act in this intelligence work”, said Wilson Lima.

Back up on the countryside

In the case of new vehicles, Wilson Lima noted that the vehicles will be destined for the municipalities of Boca do Acre, Eirunepé, Ipixuna, Guajará, Juruá, Carauauri, Envira, Itacoatiara, Manacapuru, Iranduba, Maués, Tabatinga, Tefé, Coari, Pauiní and Urucurituba. “We realized that the interior of the state was lacking actions that could combat criminality, especially the issue of drug trafficking”, said the governor.

Wilson Lima also pointed out that the vehicles are going to the cities fully prepared. “They have facial recognition, they have a front camera to read license plates and satellite monitoring that does not depend on the internet to locate all crimes in real time”, he detailed.