Início » World » In the Netherlands, women join to launch a magazine focused on the Brazilian community in Europe

In the Netherlands, women join to launch a magazine focused on the Brazilian community in Europe 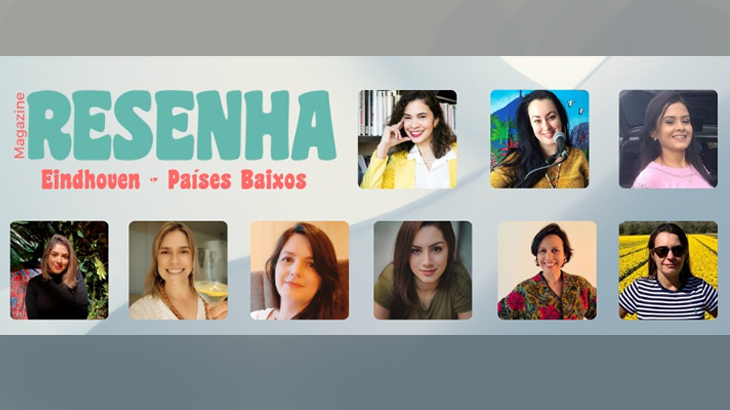 MANAUS – Among the challenges and apprenticeships, nine Brazilian women joined to start their careers in Europe. In a pioneering manner, the group decided to create an online magazine focused on the Brazilian community in the Netherlands. With a stripped-down design and already on its third edition, ‘Resenha’ is a monthly publication that mixes informative content with entertainment.

The publication comprises 30 pages written by professionals from several areas and a set of six editorials joined women from diverse Brazilian culture who aim at informing and entertaining Brazilians who live in the Netherlands. In the beginning, the idea for the project was suggested by the Brazilian advertiser Camila Jaworowicz, aged 34, born in Pernambuco, who lives in the Netherlands for three years now.

Camila was the owner of a company focused on events but the pandemic forced her to reinvent herself and change her career path. “I was quite welcomed when I migrated and started to work with a digital product. I immediately understood the great need that the Brazilian community here has to get access to content in our language, thus I thought: why not give it to them?”, she asked.

Brazilian in the Netherlands

According to the Ministry of Foreign Affairs (Itamarati), currently, there are at least 30 thousand Brazilians leaving legally in Dutch territory. This information made Camila envision the potential of her entrepreneurship. “Netherlands is a quite welcoming country where many Brazilians live.
Yet, unfortunately, not all of them can fluently speak the local language and then “Resenha was born” she stated.

In the production of the magazine, the Brazilian cultures get mixed. Camila and all other partners came from different Brazilian regions. Camila, Julianne Mallena, and Lila Ferraz are from Pernambuco. Érica Kokke and Vanusa Gomes, in their turn, carry the soul of Minas Gerais. Romi Brasil, Chris Laino, and Lu Fróes give a tone to the content that can only be found in Rio de Janeiro. And to bring that Amazonian touch, the magazine relies on Priscila Serdeira, the Amazonian journalist who integrates the team.

A newcomer in the Netherlands, Priscila stresses the relevance of “Resenha” in her new life. “The magazine has offered me a lot because it is my first project outside Brazil and it represented the opportunity I needed to keep doing what I love. Additionally, it’s quite cool to think that I’m collaborating with so many Brazilians who want to have access to content in our native language”, she stated.

The advertiser shares that as soon as she reestablished herself in Dutch territory and reopened her company, she suffered a huge blow: the pandemic appeared. So, once again, Camila had to reinvent herself to start all over again. Since then, she started working with digital products. At first, she claims to have experienced everything until she realized the potential the magazine could have.

Currently, the Brazilian idealizes great plans for the project that has earned many Brazilian clicks. “My aspiration is that soon we can deliver this material to other Brazilian communities in other countries or even continents. The goal is to keep our language alive, to not let it get lost in ourselves and, who knows, cherish those who miss their homes”, she concluded.