Indigenous people get emotional after the temporal mark trial in Brasília 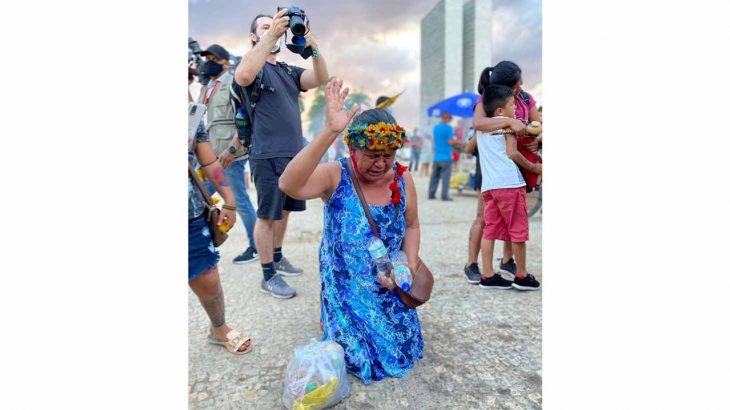 About 1,200 indigenous people, from 70 people, headed toward the STF to follow the session at the Praça dos Três Poderes. (Reproduction/ Flávia Xakriabá)

MANAUS – On the afternoon of Thursday, 2, the emotion and a brief sigh of relief took over the indigenous people present in the Plaza of Three Powers in Brasilia, after the manifestation of the Attorney General of the Republic, Augusto Aras, against the time limit during the trial regarding the maintenance of the demarcation of indigenous lands in the Federal Supreme Court (STF).

The lens of journalist Flavia Xakriabá recorded the reaction that apparently expresses the first victory of the indigenous people, soon after the attorney general’s speech. In the images, it is possible to see Laklãnõ-Xokleng indigenous people celebrating Aras’ favorable words. “Our Federal Constitution recognized original rights over the lands traditionally occupied by Indians. Brazil was not discovered. Brazil is not 521 years old. You can’t invisibilize our ancestors who bequeathed us this country”, said Aras.

According to the Articulation of Indigenous People in Brazil (Apib), around 1,200 indigenous people, from 70 people, headed toward the STF to follow the session in the Praça dos Três Poderes. After the prosecutor’s speech, the trial will continue on September 8 with the vote of the ministers of the Supreme Court.

It is worth noting that the hearing will be held on the same day as the Indigenous Women’s March. The open-air event aims to bring together 3 to 4 thousand women, who will camp in Brasilia, Federal District, from September 7 to 11, in order to bring visibility to the indigenous women’s movement.

Reference to the Xokleng people

Augusto Aras also referred to the repossession case filed by the government of Santa Catarina against the Xokleng people. The place occupied by the indigenous people overlaps a state park identified as part of the Ibirama Laklãnõ Indigenous Land (TI) and where Guarani and Kaingang indigenous people still live.

“For reasons of legal security, the identification and delimitation of the lands traditionally occupied by the Indians must be made in the concrete case, applying to each fact the constitutional norm in force at the time”, declared Aras, closing the third day of the trial.

The movement of indigenous people in Brasilia to protest against the vote on the Temporal Mark began on August 24, at the headquarters of the Federal Supreme Court (STF), mobilizing an average of 6,000 indigenous people from 176 regions of the country united in the Praça dos Três Poderes. During the protests that had international repercussions, it was the largest indigenous mobilization in the last 30 years.

Ethnicities that came together to add up and achieve the same purpose: to protest against the approval of PL 490, which determines as indigenous lands those that would be occupied by the original people on October 5, 1988, which means the need for proof of land ownership on the day of the promulgation of the Constitution of the Federative Republic of Brazil (CRFB).