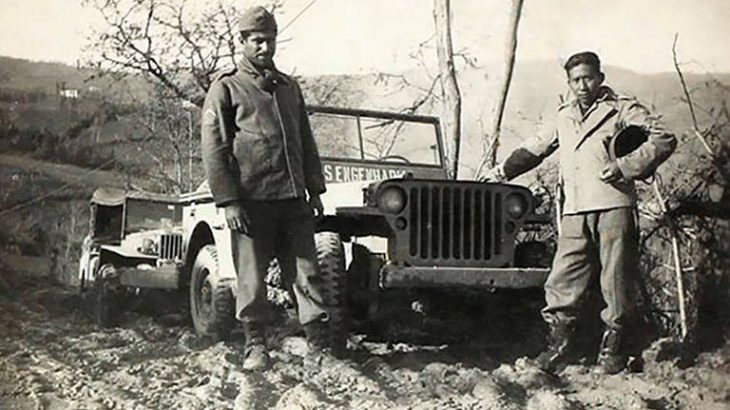 Venceslau Ribeiro (right); the indigenous reached the post of second sergeant in the FEB and fought against the Nazis in Italy during World War II (Directorate of Historical and Cultural Heritage of the Army / Divulgation)

With information from Folhapress

PORTO ALEGRE, RS – The heat and the green landscape of the tropical villages were replaced by snow white and cold that reached -15 ° C in Italian villages. Among the approximately 25,000 Brazilian soldiers who fought Adolf Hitler’s Nazi troops during World War II (1939-1945) were dozens of indigenous people, ethnicities such as Terena, Cadiueu, Kinikinau, and Guarani.

The history of the Brazilian Indians who helped the Allies to defeat the Axis powers is still little known, but it has been recovered. Another example of rescuing history is about female participation, with volunteer nurses.

The indigenous people were part of the Brazilian Expeditionary Force (FEB), spread out in different divisions such as infantry, responsible for attacking and defending, and engineering, with functions such as dismantling traps, disarming mines and even opening roads.

Brazil declared war on Hitler in 1942 after 35 Brazilian ships were attacked off the Brazilian coast and 32 sank, leaving hundreds dead. The soldiers embarked for Italy in 1944.

FEB was created especially to face Nazism in the conflict that devastated the world. The troops worked in Italy, where they won historic battles, such as those at Monte Castello and Castelnuovo. After Hitler’s defeat, the FEB was extinguished by the Brazilian government of Getúlio Vargas

During the dictatorship of the Estado Novo, one of the reasons for the closure of the FEB was the fear that prepared soldiers who fought for democracy and freedom could revolt.

“FEB is going to fight a totalitarian regime and here it was totalitarian”, says Helton Costa, a researcher with a postdoctoral degree in history from UFPR (Federal University of Paraná). According to him, FEB was a “cut out of Brazil” and as diverse as the country itself. Havia negros, indigenous and even communist, like the gaucho Carlos Scliar, for example.

Several indigenous people were part of the Ninth Engineering Battalion, which even captured a Nazi flag when it surrendered the 148th Infantry of the German Army in April 1945. About 20,000 German soldiers surrendered to the Brazilians.

The flag is preserved and displayed at the Marechal José Machado Lopes Museum, in Aquidauana, 118 km from Campo Grande. Most of the indigenous people identified by researchers are from Mato Grosso do Sul.

In the village of Ipegue, in Aquidauana, it is possible to find the tomb of Irineu Mamede, a Terena indigenous who was a soldier of the First Infantry Regiment, the same who acted in the taking of Monte Castello, a steep hill of 977 meters. In that snowy winter of 1945, the dominance of the site was instrumental in stopping Hitler’s troops in Italy.

Ferreira also met Aurélio Jorge, who gave him an interview in the Terena language, in 2000. The indigenous man died four years later. “My wife is a Terena Indian, she spoke in her mother tongue. Then he opened up, cried and was moved. Because it was in his language, questioned by someone like him. He put on his medal and put on his beret “, recalls the journalist.

Jorge even learned words in Italian and reported that the Brazilian squares were treated as heroes by Italians freed from Nazi rule. In combat, however, he used the indigenous language. Vucapanavo was Terena’s war cry, Jorge revealed in an interview with Ferreira. The term means something like “ahead!”.

Another indigenous, Otacílio Teixeira, was doubly discriminated against, according to the journalist. That’s because he was the son of a black man and an Indian. Killed in 2019, he is one of the countless war veterans left with psychological sequelae and trauma. “When he returned, like many others, he also didn’t want to know about the city, he didn’t want any more contact,” says Ferreira.

In addition to him, soldier José Quevedo, killed in 2016, also had bad memories of the fighting. “After returning, it took him more than 20 years to get a shotgun to hunt wild pig,” reports the journalist. In addition to the trauma of the war, the veterans witnessed the decline of the years that followed the end of the FEB, when they were viewed with suspicion by the government itself. They also faced discrimination due to the indigenous or black condition, as explained by Costa, a researcher.

According to him, a FEB lieutenant reported that a general even ordered dark-skinned soldiers, possibly including indigenous people, to parade in the internal columns, while whites would parade in the sides, visible to the public. The soldiers paraded before boarding and also on their return in Rio de Janeiro.”Nobody fulfilled the order and stayed for that very reason”, says Costa.

In another episode of racism, the FEB command would have asked for an honor guard without blacks to welcome Prince Humberto of Italy. The reports are part of the work “Testimony of Reserve Officers on the FEB”, published in 1949.

There is at least one recorded case of an indigenous man who came to the post of the second sergeant and therefore commanded other soldiers: Venceslau Ribeiro, from the Ninth Engineering Battalion. There are numerous photographs of Ribeiro in Italy. “It was someone who led cables and soldiers, mostly white,” says Costa.