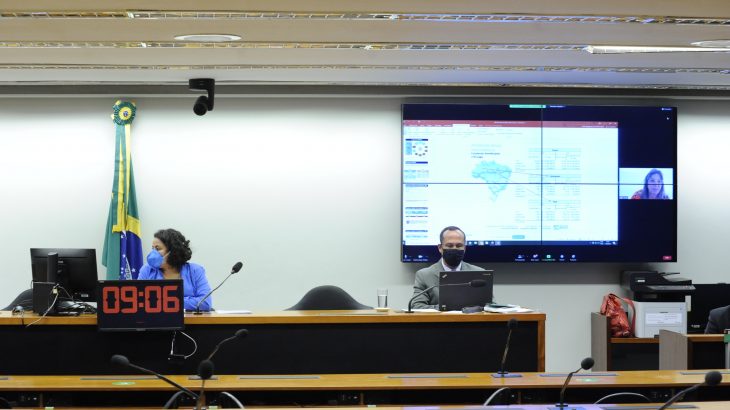 BRASILIA (DF) – A public hearing held in hybrid format at the National Integration, Regional Development and Amazon Commission (Cindra), on Wednesday, 11, discussed the guarantee of continuity of student assistance for indigenous and quilombola students from Pará and Amazonas. The meeting took place in response to a request authored by Congresswoman Vivi Reis (Psol-PA) and signed by Congressman Zé Ricardo (PT-AM).

The meeting was attended by representatives of indigenous and quilombola students, the rector of the Federal University of Pará (UFPA), Emmanuel Zagury Tourinho, and the general coordinator of Student Relations and Digital Services of the Ministry of Education, Cibele Magalhães Pinto de Castro. Besides the two authors of the request, Joenia Wapichana (Rede-RR) and Bira do Pindaré (PSB-MA), respectively general coordinator of the Mixed Parliamentary Front for the Defense of Indigenous People Rights and coordinator of the Quilombola Parliamentary Front, also participated.

Students from UFPA and the Universidade Federal do Oeste do Pará (Ufopa) expressed their concern with the interruption of the student aid known as the Bolsa Permanência Program (PBP), which is granted to indigenous and quilombola students with the objective of allowing these students, who often come from families of great social vulnerability, to access and remain.

The student Raquel Xipaya, from the Association of Indigenous Students of UFPA, said that it has already been two years that indigenous university students are no longer getting the permanence scholarship. “We need to have not only the access of these indigenous people to college, but also their permanence in these institutions. The scholarships are being cut and this hurt us,” she said.

The rector of the Federal University of Pará, Emmanuel Tourinho, spoke about the current scenario of the educational institution that has about 300 indigenous students and approximately 1,600 quilombola students. He says that the students who arrive at the institution usually demand support from student assistance and depend on it to stay at the university and complete their courses. “What has happened in the last two years is that students who would be entitled to the permanence scholarship have not received the aid. We need to find a solution so that they can stay in the institution”, highlighted the rector.

Aline Lemos, who is a member of the National Coordination of Indigenous and Quilombola Students, said that the anguish of the students is not having an answer if the system for granting the benefit will be opened this year or not.”We don’t need to be coming here, to participate in public hearings, to go to Brasília to demand a right that we have on paper, but, in practice, we are experiencing this difficulty”, she complained.

The representative of the Ministry of Education, Cibele Pinto de Castro, made a brief presentation on the operation of the National Student Assistance Program and the Permanence Allowance Program. She emphasized that one of the main pillars of both initiatives is the democratization of Higher Education in the country. She explained the operations of the programs, which are made possible according to the local reality of the federal institutions, which are responsible for preparing the public notices with the criteria for granting the aid.

She said that a supplementary credit proposal has already been approved to maintain the scholarships until the end of this year and that for the 2022 budget the Ministry of Education will submit to the Annual Budget Law Project (Ploa), approximately R$ 21 million to ensure the expansion of the number of scholarships to two thousand, starting in January.

In response to the questions made by students regarding the cutting of scholarships and delays in payments, Cibele de Castro said that the MEC has no competence to cancel scholarships, it only has to monitor the program’s internal control. “It is up to each university and each Federal Institute to analyze the registrations and requalify the students. She also stressed that the opening of the system for granting the aid is conditional on the existence of a budget allocation.

The UFPA rector said that the budget law limits the growth of public spending, but does not force a reduction and said that, “in the midst of this social tragedy that we are already experiencing, we are going to throw out several students, the result of a political decision, dramatic especially for a social reality such as the one in the Amazon”. He alerted that last year the vote of the Budget Guidelines Law (LOA) cut the resources for the universities and it is essential that the MEC fight for resources from the government. The rector also made an appeal so that these students are not forced to abandon the university for lack of student aid.