Início » Environment » Social-environmental activist from Manaus will represent Amazonas at COP-26, in Scotland 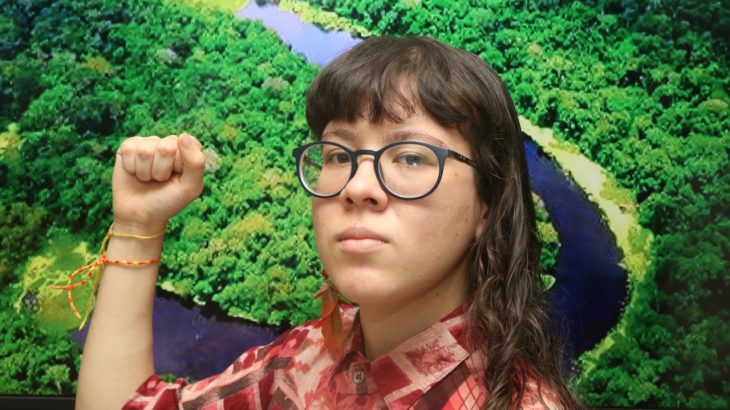 MANAUS – With only 22 years old, social-environmental activist and biological science student of the Federal University of Amazonas (Ufam), Celina Maria Ferreira Pinagé, is going to Scotland to represent Amazonas in the 26th United Nations Climate Change Conference (COP-26). The event takes place on October 31 and runs until November 12.

In an exclusive interview to CENARIUM, Celina tells that every year the COP happens in a different location, and the event is also open to the civil society, but to be able to go you need to take into account some topics. “To be there you need to have a credential that is nothing more than an official UN document that says that you are allowed to enter the environment, as if it were an invitation”, she said.

“For people from civil society who want to participate in person at the event, they take into consideration issues like: if you already have some previous experience with climate change issues, especially with the topics that will be addressed there, because the COP is a space for decision making, it is a place where there will be much debate, about carbon emissions, Brazil’s goals for 2030”, reported Celina.

Celina tells CENARIUM’s reporting team that a pre-selection is made that takes into account the knowledge that the person who wants to participate has, and in this action that precedes the event several themes are approached and it is necessary to talk about these themes. “They evaluate if we can take a position on them and understand them. Besides knowing how we are going to position ourselves, because wanting it or not, civil society is a response for the state and for the country”, she said.

Celina tells that to get to the COP, she started to be part of Non-Governmental Organization (NGO) EngajaMundo. “Since 2018 I’ve been part of EngajaMundo, which is made up exclusively of young people and within it there are several groups, and one of them is just about climate change and I’ve been there since 2018. We are always debating agendas on the subject, generating content. And engajaMundo is very close and related to the COP. There are several organizations that are accredited to participate in the event. The NGO was a door for me, they also take into account how long the person has been in the NGO, those who have been there longer have more chances of getting there, so the fact that I have been there since 2018 helped me a lot”, she stated.

The COP is the main UN summit when it comes to climate issues. The subject is extremely positive, especially with the negative effects of current policies. After a report published by the organization, scientists and environmentalists detected that the world is warming faster than expected. And the event intends to debate and outline strategies to reduce these greenhouse gases for at least half of this decade. Forest fires and other environmental disasters happening around the world leave little doubt as to whether this goal will be reached.