Test-event will have mandatory examination against Covid-19 in Manaus 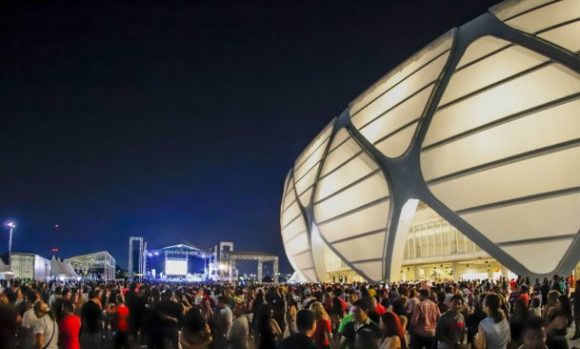 MANAUS – The public who will attend the test event at the Arena da Amazônia’s podium, in Manaus, next September 24th, will have to be submitted to a Covid-19 test, of the PCR type, within 48 hours before the show. In addition, the public will have to have their coronavirus vaccination up to date to enjoy Tierry’s show.

Three sectors will be reserved for the public to enjoy the attraction, the yellow, red, and blue, which will be visible in booths for family groups, with about two meters between the spaces. Each sector block will hold up to nine people, with bar service that will be served to consumers. In case one member tests positive for Covid-19, there will be no possibility of selling the ticket to another person.

According to the manager of surveillance of communicable diseases of the Health Surveillance Foundation of Amazonas – Dr. Rosemary Costa Pinto (FVS-RCP/AM), Alessandro Melo, both the audience and the people who will be working on the day of the event, as the organization and support staff, will need to make the Covid-19 test, which will be available by the institution.

“The FVS is working directly with the State Department of Health, according to the Anvisa protocols, in order to test the people who will participate in the event. We will have two stages: the first is to verify the vaccine status, where the testing will take place, and the second stage, that those people who have their vaccine status up to date. In this case, they will perform the antigen type test and only with a negative test they will be able to participate in the event”, commented Sandro Melo.

So that there is the testing of the population, FVS-AM teams will be in the Arena da Amazônia on 22 and 23, from 18h to 00h, providing the tests. “People who buy tickets are already being guided to come on these days for testing here in the Arena. If people do not want to test here, they are not prevented from participating in the event, because they can go to a drugstore or private laboratory and do the antigen test or RT-PCR, within 48 hours of the test”, he stressed.

After the test-event, the Amazonas Health Surveillance Foundation (FVS-AM) will be monitoring, for 14 days, the people who went to the show to identify whether there was transmission of Covid-19 or not. This period includes the incubation period of the disease. The reports will be used to evaluate the resumption of other events around the state.

Still according to Alessandro Melo, a follow-up will be done in the entire urgency and emergency network of the state. The CPF number of the people who participate in the event will be included in an application so that they can be monitored.

“If this person goes to a health unit and is notified with suspected Covid, it is mandatory to notify and identify the CPF. From the moment it is entered into the system, we will have a way to track where this person was seen and be able to reach him/her. We will be able to link the people who participated in the event to a health unit and take the appropriate measures”, he said.

For the Amazonas Secretary of Culture, Marco Apolo Muniz, the event means another step towards the return of the economy and the promotion of culture and entertainment in the State. He believes that, with the advance of the vaccine and a “positive” percentage of the immunized population, it is the right time to resume activities in this segment.

“It is an important step for this retaking of culture and economy. The government has dialogued with all the movements of the economy and with the cultural sector it was no different. We had many limiting factors that made it impossible, but now with the advance of the vaccine and with the percentage of people duly immunized we have the security to be able to hold this event and we are moving forward. Understanding the importance of the amount of jobs and income that is generated in an activity like this”, says Marco Apolo.

Marco Apolo also remembered other event formats that, in order to be held, need to be adapted due to the pandemic. He cited as an example the Folkloric Festival of Parintins and the Cirandas Festival of Manacapuru.

“In Parintins, we had no audiences, but we had more than a thousand people tested with FVS monitoring and zero cases of Covid and no negative impact for the city. So did Manacapuru, with a significant number of people, but with zero impact to the health of the city. Now we leave then for the other side, which is to put audience at these events”, says the secretary.