U.S. Representatives appeal for Indigenous rights in the Brazilian Amazon 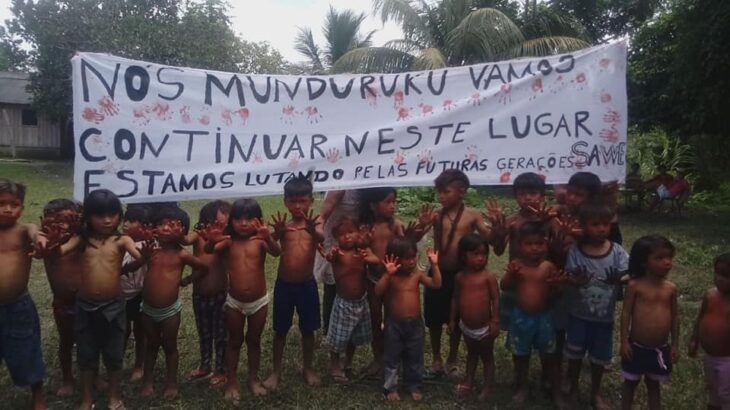 Children at the III Meeting of Munduruku women from the middle Tapajós, in the village Sawré Muybu. Photo by Pariri Indigenous Association (Reproduction / Cimi)

United States congresspeople sent an appeal to the country’s ambassador to Brazil. The document sent by the representatives calls for the protection of Munduruku indigenous peoples, who have their land invaded by thieves of public lands for illegal mining.

The request is for the Brazilian federal government to act in defense of the indigenous people who are suffering from the contamination of Covid-19 carried to their lands by the invading miners. However, the congresspeople themselves point to economic interests in the region.

The members of Congress affirmed that they are concerned with the protection of forest and indigenous peoples, the true Amazon’s guardians. The main concern is with the security of Munduruku peoples, whose territory is under constant and growing threat from invaders, deforestation, and destruction.

The document also cites the concern for individual safety of the leaders Munduruku and mentions the organizations Munduruku Ipereg Ayu Movement and the Munduruku Women’s Association Wakoborun, the latter being led by a witness of suspicious activity in front of their home, with vehicles parked for long periods and taking individual photos of her husband and lawyer. The targeted letter also referred to the attack on the Wakoborun Association last month.

“Unfortunately, these accidents are part of a long process of threats to Munduruku leaders and maybe an omen of violence against them. As you can remember, leaders and activists in the Amazon have already been victims of violence and even death”, says an excerpt.

The document also points to the growing invasion of heavily armed miners in Munduruku territory, which means an imminent threat to communities and the environment.

Congresspeople also raised the issue of the spread of Covid-19 and pointed out the concern that miners were infected with the disease, impacting indigenous communities and contributing to hundreds of deaths.

The Congressional appeal further encourages Ambassador Todd Chapman to discuss these concerns with President Jair Bolsonaro and Environment Minister, Ricardo Salles. The intention is to question them about concrete actions that need to be taken to act against illegal gold miners in Munduruku territory.

Signed by Raul Manuel Grijalva, the document also indicates a point of economic and political interest of the United States government in the matter, that would be the investment in a mining company with resources from the country, which operates in the region.

“The current conflict of the Munduruku is directly related to the policies and the economy of the United States in the Brazilian Amazon. For example, companies and banks with investments from the United States, such as Black Rock, Vanguard, Ip Morgan Chase, and Bank of America, which invested billions of dollars in Anglo-American, a mining company that, according to congressmen, “has been trying to get mining permits in Munduruku territory and has faced opposition “.

The Munduruku inhabit indigenous areas in the southwest of the Pará’s State, east of Amazonas, and west of Mato Grosso.

Last March, the Federal Public Ministry (MPF) requested action by federal forces to contain the advance of the invasion of prospectors in the region of the Vanilla stream, in Jacareacanga, western Pará, within the territory of the Munduruku indigenous people. According to the institution, complaints pointed to an increase in invasions, with the entry of a large number of wheel loaders.

Munduruku leaders sent documents to the MPF informing the situation, asking for support from the authorities, and informing that the invaders are heavily armed and were making threats to those who resisted the advance of the miners. For the MPF, there is “an imminent risk of a conflict within the Munduruku indigenous land, given the articulation of indigenous people against illegal mining to directly combat the entry of machinery”.

In documents sent to the Federal Police, which is already investigating the activities of criminal groups within the indigenous area, the MPF asked for measures to contain the advance of the prospectors, if necessary with the support of other police forces. The request was made on an urgent basis. 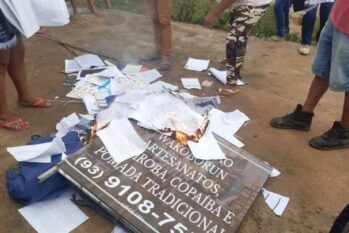