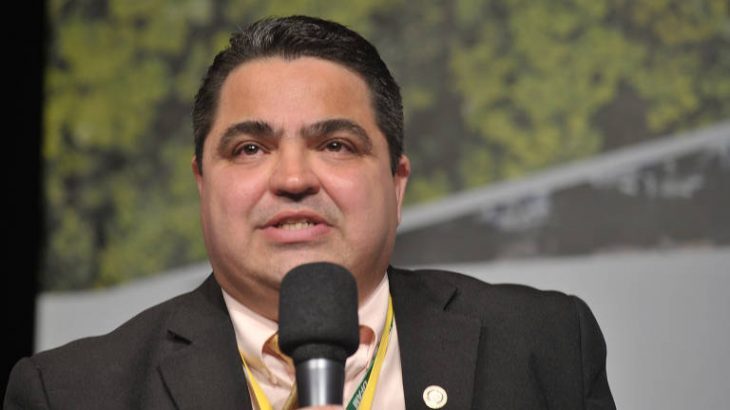 The rector of the Federal University of Amazonas (Ufam). (Reproduction/Internet)

MANAUS – The rector of the Federal University of Amazonas (Ufam), Sylvio Puga, participated this Wednesday, 10, virtually, of the Amazon in Loco Seminar, where he highlighted the importance of investing in the academic units in the interior of the State, aiming at the future of the technological, economic and social development of the State. In the event hosted in Belém, Pará, but held in a hybrid way, the possibilities of investments and economically sustainable activities in the Amazon region for European companies are discussed.

In the panel that debated the production of knowledge and technology in the Amazon, the moderator was the rector of the Federal University of Pará (UFPA), Emmanuel Tourinho. The speakers were the deputy director of Territorial Development at the Amazon Research Institute (Ipam), Lucimar Souza, scientist Carlos Nobre, and rector Puga.

“Today, our institution is undergoing a transformation project in relation to projects that used to be focused and aimed at the capital. When we seek resources, we prioritize the academic units of the interior because we understand that the Manaus Free Trade Zone is important for the development of the Amazon, but she, alone, will not make this process over the coming years, then we understand that the economic and social future of our state is present in the interior”, pointed out the rector of Ufam, Sylvio Puga, in presentation.

The first project presented was Super, made in partnership with Samsung to boost training and research in technological areas courses at Ufam, which involves nine undergraduate courses: Computer Science, Electrical Engineering (Electronics, Telecommunications and Electrical Engineering), Computer Engineering, Information Systems, Software Engineering, Production Engineering and Design. The project will be developed in three academic units, including the Itacoatiara campus, 175 kilometers from Manaus.

The goal is to encourage the innovation ecosystem in the Alto Solimões region, located in the southwest of Amazonas. The Park will contribute to the creation of new businesses, mainly focused on the generation of value, from the sustainable use of the biodiversity of the region, with the development and commercialization of products with high added value such as: biocosmetics, phytotherapics and nutraceutical foods, made with Amazonian inputs and with high market demand in Brazil and abroad.

The event started this Wednesday and ends this Thursday, the 11th, with the participation of entrepreneurs and a lecture agenda with the presence of authorities and experts. The program includes presentations and debates about the Amazon and an exhibition fair of products, services, and technology.

In parallel to the main event, business rounds are scheduled to allow companies that work with business in the region to contact interested parties and investors. The business rounds are with open registrations and intend to gather representatives of companies from the European Union member countries and the Amazon.

The event is organized by Eurocâmaras do Brasil, the Finnish Chamber of Commerce in Brazil (Finncham Brazil) and the Official Spanish Chamber of Commerce in Brazil. The business rounds count with the partnership of the Brazilian Service of Support to Micro and Small Enterprises (Sebrae), Federation of Industries of the State of Pará (Fiepa) and the Enterprise Europe Network (EEN). In Brazil, the EEN is managed by the Brazilian Institute for Information in Science and Technology (Ibict).