Início » Society » Video: bus is consumed by flames on the avenue of Manaus

Video: bus is consumed by flames on the avenue of Manaus 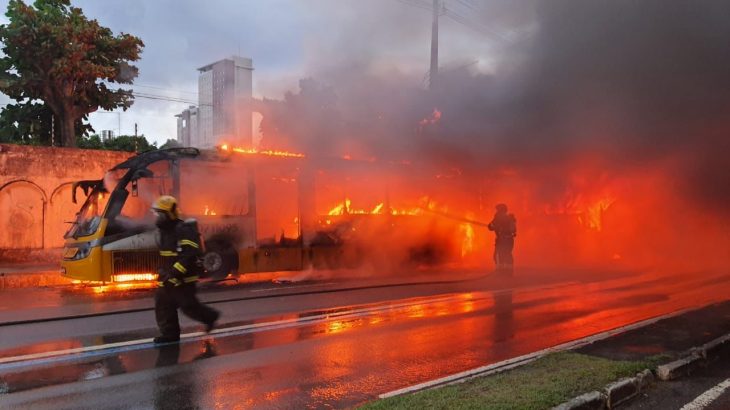 The vehicle, which runs to the East side of the city, was destroyed (Promotion/Cabo BM N. Souza)

MANAUS – A public transport bus from Manaus was consumed by flames on Monday afternoon, 11, on Constantino Nery Avenue, Chapada neighborhood, in the South-Central zone of the capital. The vehicle, which makes line to the East zone of the city, was completely destroyed. According to the Military Fire Department of Amazonas (CBMAM), there was no record of injured or fatal victims.

According to the Military Firefighters Operations Center (Cobom), four vehicles were sent to the scene to try to put out the fire, being two self-propelled tankers (ABT 29 and ABT 31), a self-tank support (ATA 01) and an autotank (AR 47). The passengers got out of the vehicle before the flames started. There is still no information about the cause of the fire.

Also according to the Fire Department, the case occurred around 5:30 pm. The bus company Global Green, line 652, was traveling in the direction Center/neighborhood. Images circulating on social networks show a large amount of smoke being dispersed.

In other images provided by the corporation, it is possible to see the bi-articulated bus being consumed by a large proportion of fire, while firefighters try to put out the flames.

The traffic on the avenue, considered one of the busiest in Manaus, was completely stopped for about 1 hour, causing inconvenience to the population. The road was only released after the firefighters put out the fire.