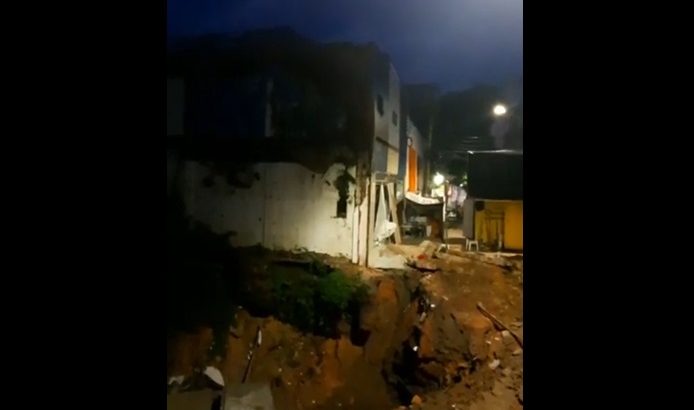 There is no information about victims (Reproduction)

MANAUS – An abandoned building collapsed on the night of Thursday, 18, at Avenida Henrique Martins, in the center of the capital of Amazonas. A video recorded by a resident shows the moment when the property falls apart. So far, there is no information on victims.

The site was a commercial point occupied by a shoe store, but was deactivated after a crater opened in the region in 2020. The area affected by the hole was also under construction by the Manaus City Hall, since October this year.

After the building collapsed, the Military Fire Department of Amazonas (CBMA) moved agents to search for possible victims in the rubble, but preliminary information from the Integrated Center for Security Operations (Ciops) indicate that the building was empty at the time of collapse.

According to residents, the collapse occurred after they heard noises of stone and glass breaking in the area. The rainy day is suspected to have worsened the erosion that had formed in front of the site.

In the recorded video, it is possible to see the hole around the building. According to the Fire Department, the incident occurred at 6:26 pm. In a statement, the Manaus City Hall, through the Municipal Department of Infrastructure (Seminf), reported that the property collapsed without workers on site.

“The property was interdicted by the Municipal Institute of Urban Planning (Implurb), since the beginning of the works. The area was also interdicted by the Civil Defense of the city, and within the demarcated perimeter, Seminf is supervising the implementation work of the new stormwater channels. The site is being monitored 24 hours and the incident did not cause any damage to the work or the surroundings. According to engineer Igor Mendes, Seminf’s inspector, the building had its foundation exposed and the possibility of the building collapsing was already foreseen. The heavy rains recorded in recent days in the city contributed to erode the soil, causing the accident”, says the note.

Watch the video of the collapse: