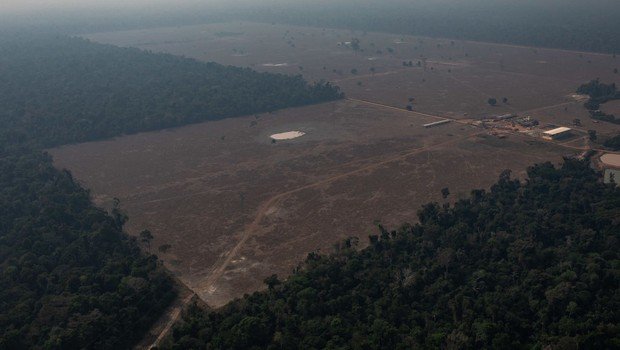 Deforestation of part of the Amazon rainforest in the Candeias do Jamari region, in a photo from August 2019 (Photo: Victor Moriyama / Getty Images)

With information from the advisory

PARÁ – In 2020, deforestation in the Amazon reached a new record, according to the monitoring carried out by the Institute of Man and the Environment of the Amazon (Imazon). There were more than eight thousand square kilometers of the green area lost, which includes not only the vegetation itself but all the biodiversity of fauna and flora that the extension welcomed. It was the highest record in the last 10 years, still 30% higher than that of 2019.

Brazil is home to 60% of the Amazon rainforest, the largest tropical forest in the world. The rest is spread across Peru, Bolivia, Colombia, Venezuela, Ecuador, Guyana, Suriname, and French Guiana. The gigantism of the forest makes it difficult to combat illegal deforestation, which grows every year, as shown by Imazon records.

Monitoring of the area by satellites, by institutions such as Imazon, Inpe (National Institute for Space Research), and even by NASA (North American Space Agency) obtains accurate records, but the analysis of this information, done by technicians manually, ends up being a rather slow process. What they are looking for in the images are mainly illegal roads opened in the forest as this is the main indication that there is – or will be – an area deforested.

Carlos Souza, Amazon monitoring coordinator, and researcher associated with Imazon defines these roads as “arteries of destruction”, and explains that 95% of the accumulated deforestation is concentrated within a radius of five kilometers from all registered roads.

With manual mapping, it can take up to a year to identify signs of risk – which can make it too late. “Manually, we were always looking to the past”, says Carlos, explaining that this allowed, at most, a punishing action. But all the wealth of that piece of the forest had already been lost.

“Historically, we monitor deforestation using satellites. You can see roads, deforestation, selective logging, mining. But, when we detect it, it has already happened. We already lost part of the patrimony. It lost biodiversity, emitted carbon and degraded the ecosystem “, laments the researcher.

Now, with a partnership with Microsoft and Fundo Vale, the ant work done by the researchers is being taught to the machines. With artificial intelligence, the data gains a processing scale in the dimension that the forest demands. “For the entire Amazon, we need computing power,” says Lucia Rodrigues, Microsoft Brazil’s philanthropy leader.

What used to take a year can now be done in one day and, as the system receives more information and ‘learns’, the process can be reduced to a few hours. “It is a brutal gain in the ability to generate information”, celebrates Carlos. In addition to identifying illegal roads, the idea is that AI will also make the prediction of threatened areas, considering variables other than illegal roads. “With AI, we will be able to more quickly capture roads, these deforestation ignition points, and obtain more robust predictor variables. It is a very promising model. Predicting with this big data requires artificial intelligence and cloud computing scale”.

The start of the project required a task force of more than 20 institutions operating in the Amazon region, such as city halls, NGOs, researchers, lawyers, fire brigades, and the Public Ministry. Using design thinking methodology, they defined the types of information – or inputs – important about combating deforestation and how the dashboard should be created, which, at the end of the project, will be available to society and will display the main indicators.

“The data can be cross-checked in several ways, such as on indigenous reservation, environmental protection areas, meatpacking plants in the region, rural environmental registry”, explains Lucia. “The objective is to empower society as a whole, with relevant information in prevention work. Understand what area is at risk and what to do to reduce the likelihood that it will actually be degraded “, adds the executive. Microsoft acts, in addition to AI training, in cloud credit – the azure system -, since cloud technology will be fundamental to the online availability of the panel. Vale focuses on supporting researchers.

At the moment, the project is in the testing phase of the prediction models, which is using all the satellite images available in the public databases. The next steps are to improve it and optimize it in the cloud. The panel is expected to be available in early June. “We are in an effort to understand the cost, the size of the cloud, the ideal structure, and the timely response time”, details Carlos.

The project is unprecedented among Microsoft’s actions in AI and a pioneer in Brazil. A second project will be the creation of an app for on-site work, with alerts sent by people and NGOs who are directly in the field, observing and generating information.

“What is most important in this strategy is to change the paradigm of control and punishment for prevention. The project’s success will be the intervention that prevented deforestation. How much forest can we save with interventions “, says Carlos.