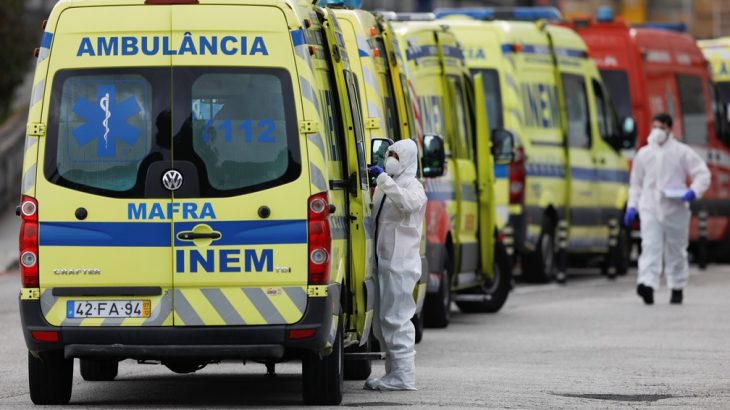 Ambulances in line up transporting patients with covid-19 in front of the hospital in Lisboa, Portugal (Pedro Nunes/Reuters)

Everything indicates that the drama that the Amazonas has experienced in recent weeks, with a lack of beds and oxygen in public and private health care hospital units must be repeated in other parts of the world. In Portugal, for example, the situation is critical in several hospitals in the Lisbon and Vale do Tejo region. Germany and Scotland have extended the confinement period and the whole of Europe remains on alert, with countries registering an increase in the rate of infection with the new coronavirus.

In an official note issued to the Portuguese press, the South Zone Doctors’ Union (SMZS) denounced that, “the lack of human resources, beds, and even oxygen has led to the accumulation of patients on stretchers, left at the doors of hospitals and in ambulances. We are aware that several hospitals are unable to supply oxygen with adequate pressure to the patients, a problem that tends to worsen in the coming days”, he reveals.

The document also highlights that “due to the lack of means, in several units, the criteria for care and hospitalization have become more restrictive, leaving out many patients with respiratory difficulties and with potentially worsening clinical conditions”, said the official note sent to the press.

The classrooms in Portugal closed again this Friday (01/22), due to the worsening of the pandemic, mainly the impact of the British variant of SARS-CoV-2, that the prime minister had already demonstrated shown fear because of the announcement of further spread among young people. The government also decreed a curfew across the country from 8 pm. On weekends, mandatory confinement is from 1 pm.

On January 13, the government of Portugal decreed the second lockdown to contain the increase in the number of coronavirus cases in the country. Trade and non-essential services are closed and should remain so until the end of January when the standard is expected to undergo a reassessment.

The order is that everyone goes back to work in the home office system, as it happened in March and April last year.