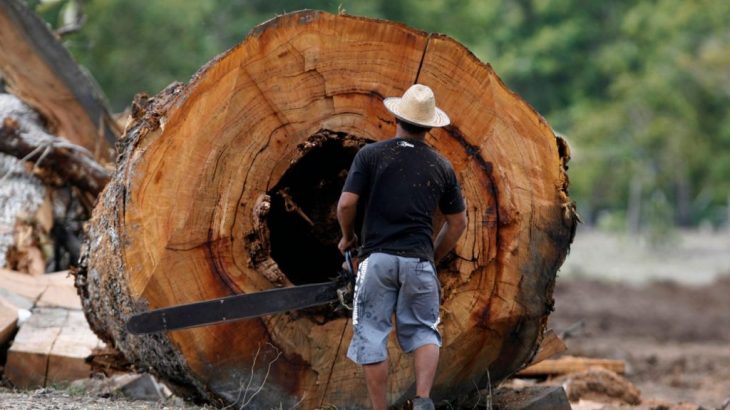 MANAUS – Amapá is one of the nine states that make up the region of greatest biodiversity in the world, the Legal Amazon, which had an area equivalent to about 100 soccer fields deforested by illegal logging. According to an unprecedented study surveyed by satellite images and published this Monday, 27, this destruction occurred between the period from August 2019 to July 2020.

The survey was conducted based on information provided by the Amapá State Department of Environment (Sema) to the Simex Network, an Amazon monitoring tool that is integrated by the Institute of Man and Environment of the Amazon (Imazon), Institute for Conservation and Sustainable Development of the Amazon (Idesam), Institute for Forest and Agricultural Management and Certification (Imaflora) and the Center for Life Institute (ICV).

According to the study, in Amapá alone, 730 hectares were logged in one year, of which 96 hectares (13%) were illegally logged. The remainder – that is, most of this deforestation -, corresponding to 634 hectares (87%), was authorized.

The illegal logging occurred in only two towns in the central-west region of Amapá, of the 16 existing in the state: Pedra Branca do Amapari, where 50 hectares were deforested (52%), and Porto Grande, where 46 hectares were destroyed (48%). According to the monitoring system, 65 of the hectares with unauthorized logging are on registered rural properties (68%) and 30 in settlements (32%).

Exploitation may be greater

The researchers also highlight that between August 2019 and July 2020 a high percentage of clouds was observed in the optical satellite images that impaired the monitoring of most of the state, which may mean that logging in the region is even greater.

According to Dalton Cardoso, an Imazon researcher, the region in which the state is located has very peculiar climatological aspects, contributing to the existence of high percentages of clouds in a good part of the year. This factor is crucial for specialists to raise data for research and make monitoring by satellite images more difficult.

“Although we have identified and mapped exploration areas, we do not rule out the existence of others ‘hidden’ by clouds”, reinforced Dalton Cardoso.

For the environmentalist master degree in Ecology Carlos Durigan, from the Wildlife Conservation Society Brazil (WCS Brazil), studies such as those of the Simex Network are fundamental for combating deforestation and the monitoring actions of environmental agencies in the Legal Amazon can make a significant contribution to the development of a state’s management.

“It is by monitoring impacts and seeking to understand their causes that one can evaluate the best measures to be taken to tackle degradation. Unfortunately, currently, public management has minimized and even denied findings such as these and this makes it difficult for effective actions to be taken to combat environmental crimes”, said the environmentalist.

Durigan also pointed out that the deforestation fronts have spread throughout the region and “what is happening in Amapá is a reflection of the absence of a firm policy to combat environmental crimes combined with a positive agenda of investments in sustainable alternatives for regional development. It is important that the alert signal is given, even for regions without an important history of degradation, so that preventive measures are adopted”, he concluded.