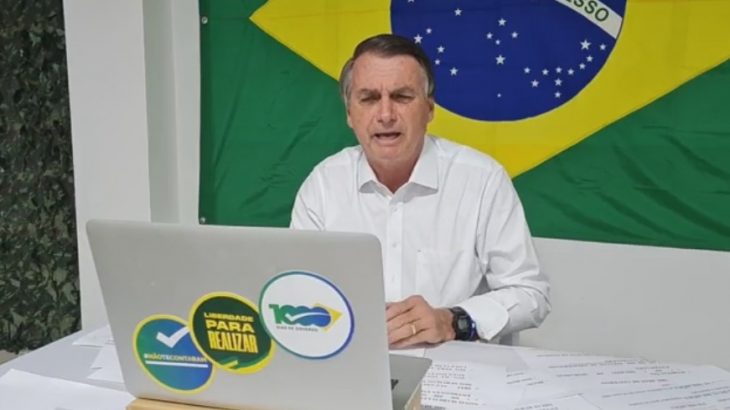 President of the Republic, Jair Bolsonaro during a Facebook Live (Reproduction/Internet)

MANAUS – In his visit to Manauense soil, the President of the Republic, Jair Bolsonaro (no party), participated in a live broadcast on the official Facebook profile, on the morning of Wednesday, 27, where he stressed the importance of freedom of the press, provided it is used responsibly. This week, the live where the federal representative replicated fake news about AIDS and the Covid-19 vaccine was banned from Facebook and YouTube.

“We do need an independent press, freedom of the press above all, but obviously with responsibility. I was criticized a lot, but in a fair way, and that is what we need in Brazil”, Bolsonaro said during an interview on national radio. Besides press freedom, the president also commented on the price of fuel increase, and on the Covid CPI report, approved this Tuesday, 26.

Jair Bolsonaro had his YouTube channel temporarily suspended after the president made a live where he associated the Covid-19 vaccine with AIDS. Days earlier, the Facebook and Instagram platforms also removed the federal representative’s broadcast from social media. Bolsonaro has stated that he will not be taking back his channel and that he will do printed livestreams from now on.

On Tuesday, 27, Senator Renan Calheiros (MDB-AL) and the dome of the Covid CPI decided to include in the Commission’s final report the request for Jair Bolsonaro’s ban from social networks. The Commission also asked for the separate request to send an injunction to the Minister of the Supreme Court (STF), Alexandre de Moraes, in the fake news investigation.

“We will forward a precautionary action with the STF requesting the banning of him on social networks, as occurred in the United States with Donald Trump” said Renan, before confirming that Bolsonaro’s speech was included in the CPI’s final report. By Twitter, the senator also said that the statement “is not just fake news, it is more than a simple lie, this is state terrorism”. “Justice needs to put the brakes on this madness”, he posted.

The vice president of the CPI, Randolfe Rodrigues (Rede-AP), also expressed himself via social networks. “We have an habitual offender in the Presidency of the Republic! I inform you that we will include, in the CPI report, Bolsonaro’s lying and absurd speech associating the Covid-19 vaccine with AIDS”, he posted. “In addition, we will forward a letter to Minister Alexandre de Moraes, asking that Bolsonaro be investigated for this absurdity, within the scope of the fake news inquiry. We will recommend to social media platforms the suspension and/or banning of the president”, he said.