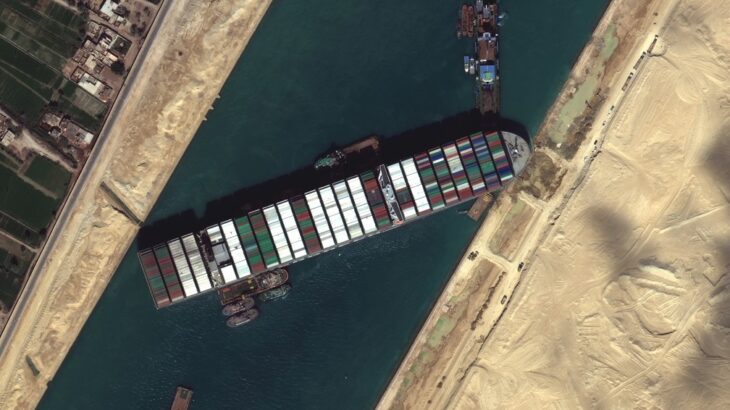 Visão de satélite do navio Ever Given encalhado no Canal de Suez, no Egito, no dia 27 de março (Reprodução/G1)

While a gigantic operation is carried out to move Ever Given, a freighter stranded since Tuesday, 23, in the Suez Canal, hundreds of ships flock to both sides of the passage, waiting for their turn to cross.

As of Friday, 26, there were 237 ships stopped near the canal in Egypt, according to data collected by the news agency EFE from Leth Agencies, which offers logistics services on various channels and straits around the world.

The blockade interrupted passage between Asia and Europe of goods valued at $ 9.6 billion a day, according to the consultancy Lloyd’s List Intelligence. More than 12% of world trade moves along the route, according to data from the Suez Canal Authority.

Those in charge of the rescue operation have warned that it may take days or even weeks to move Ever Given, owned by shipping company Evergreen. Some ships have already considered going around southern Africa, such as Ever Greet, also owned by Evergreen, according to Lloyd’s List, although the crossing will take almost 12 more days.

At the moment, the strategy used to unseat the ship is to remove sand from the shore and use tugboats to pull Ever Given. If that remains insufficient, rescue workers may have to remove some of the containers the ship is carrying to lighten its weight, says Osama Rabie, the president of the Suez Canal Authority (SCA), a state-owned company that manages the passage. He says, however, that he hoped this was not necessary.

John Denholm, president of the United Kingdom’s Navigation Chamber, previously told the BBC that transferring the cargo to another ship or the bank of the canal would involve bringing specialized equipment, including a crane that would need to be over 60 meters high. “If we follow this strategy of making the ship lighter, I suspect it will take weeks to unfasten it”, said Denholm.

The first reports said that the 400-meter, 200,000-ton ship hit the shore amid strong winds and a sandstorm that affected visibility. However, Rabie says that weather conditions were not “the main reasons” for the ship’s stranding. “There may have been technical problems or human error”, he says, without giving details. “All of these factors will be clarified in the investigation.”