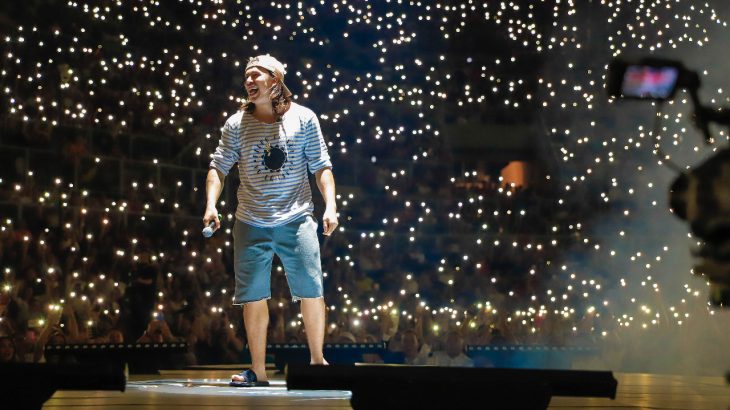 Whindersson in a show around the country (Reproduction)

MANAUS (AM) – The comedian Whindersson Nunes declared, this Friday, 27, through Twitter, his desire to have one more day to perform at Teatro Amazonas, in the historic center of Manaus. Whindersson referred to himself as a citizen of Amazonas, after being nominated for the title by the Legislative Assembly of the State of Amazonas (Aleam), a tribute approved by the plenary of the Legislative House.

“As a citizen of Amazonas I wanted one more day at the theater to record an incredible show, I promise it will be great, this show means a lot to me, and the work would be complete if I had one more day”, he said.

In response, the Department of Culture of Amazonas (SEC-AM) questions what is preventing the artist from performing the show in the city. “And what is stopping you, little brother? Who also answered the comedian was the governor Wilson Lima (PSC), who declared “Tá liberado, Whindersson. Just set the day and time. The people of our state open the doors of Teatro Amazonas with much joy for you.

Some Internet users reacted to the comedian’s publication stating: “Dude, now you can get in free at Amazonas Opera House KKKKKKKK you can go there every day just to hit the leg, enjoy the benefits”, said one of Whindersson’s followers.

The Amazonas State Legislative Assembly (Aleam) approved, on Wednesday, 25, the Bill (PL) No. 224/2021, authored by the state lawmaker Cape Maciel (PL), which gives the comedian Whindersson Nunes the title of Citizen of Amazonas. According to the state lawmaker Fausto Júnior (PRTB), the comedian helped the State in a moment of greater difficulty, referring to the period of lack of oxygen in hospitals of Amazonas in the Covid-19 pandemic, in January this year.

In January this year, Whindersson made cash donations for the purchase of hospital supplies and enabled the delivery of cylinders to Manaus. In this period, Nunes published in a social network about the donation: “I have a special affection for Manaus because it was one of the first cities to give me moral as an artist, I never forget, helped me to be the artist I am today, many donations in the Pix for hospital supplies, and we have a value of 150 cylinders of 50L, tomorrow I will update you!” (sic), he wrote.