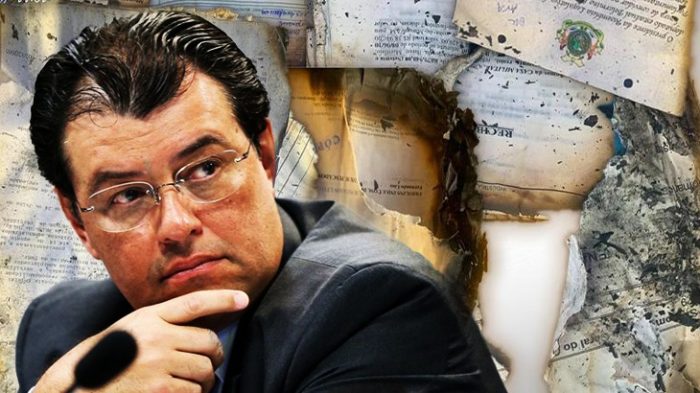 MANAUS – An attempted fire, in the Parque São Pedro Community, located in the Tarumã neighborhood, West zone of Manaus, called the attention of residents and of those who passed by the place. Among the ashes of the fire, which was recorded in early August this year, were five bags with received and certificates issued by service providers to the Civil and Military Houses of the State in the management of former governor and current senator for Amazonas, Eduardo Braga (MDB).

Braga was governor of the state between January 1, 2003 and March 31, 2010. Among the companies that had documents found in the fire is the Friolins Indústria e Comércio de Pescado Ltda., which is located in Manacapuru (87 kilometers from Manaus), and the company Tio Táxi Aéreo, based on Avenida Professor Nilton Lins, Flores neighborhood, north of Manaus.

In the bags was also found a request for payment of the company Friolins, which had been forwarded to the Casa Militar on February 18, 2010, amounting to R$108,800. In it there was a request for the “lease of sea boat, for the month in fiscal year 2010. During this period, who was heading the body was Raul Armônia Zaidan, arrested in 2017, in the operation “Political Cost”, launched by the Federal Police (PF). The operation was the unfolding of another operation known as “Maus Caminhos”, which dismantled a corruption scheme in the area of Health in the State.

In another bag found, partially consumed by flames, were documents from the company Tio Táxi Aéreo. In addition, a Debt Clearance Certificate (CND) issued by the Ministry of Finance on July 23, 2005 was also found with the bag. In consultation with the IRS site, CENARIUM confirmed that the company works mainly with the activity of air cargo transport, being launched on October 3, 2000, with a capital stock of R$1,280,000.00, managed by Francisco do Nascimento.

In social networks, Senator Eduardo Braga said that the destruction of official state documents needs to be investigated thoroughly. “Through the press, Senator Eduardo Braga received information about the burning of documents relating to the period of his administration, which belonged to the Civil and Military Houses, in a wooded area in the Tarumã neighborhood in Manaus”, reinforced through the press office.

Trying to deflect any suspicion, Braga also said that the responsibility for the preservation and care of the material is the state administration. “Such conduct needs to be investigated rigorously and impartially”, he reported.

In consultation with the Transparency Portal of the Government of Amazonas you can find information that the company Friolins Indústria Comércio de Pescados Ltda received the amount of R$ 600 thousand, in the management of Eduardo Braga (MDB), only in 2007, with payment made by the State Department of Social Assistance (Seas). And the company Tio Táxia Aéreo Ltda., also in the Braga administration, received the amount of R$ 720 thousand for the lease of twin-engine aircraft for five passengers.