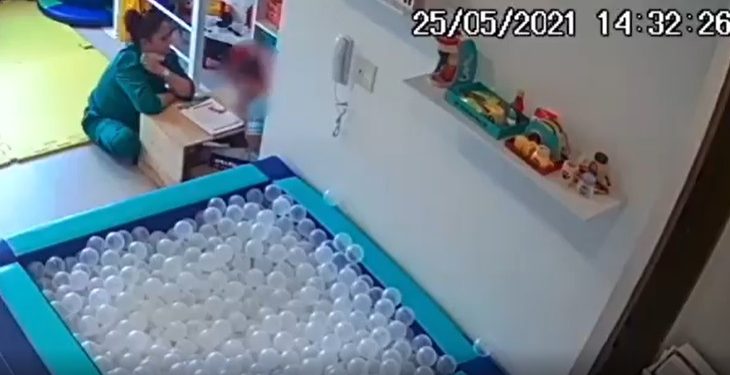 In a note, Speciale Clínica Multidisciplinar informed that Samia was dismissed from the company (Reproduction)

MANAUS – A physical therapist, identified as Samia Patricia Riatto Watanabe, 44 years, who appears in a security camera video assaulting an 8-year-old autistic child in a private clinic in Manaus, was indicted, on Monday, 5, for mistreatment. In a statement, Speciale Clínica Multidisciplinar Clínica also reported that Samia was disconnected from the company.

“Speciale Clínica Multidisciplinary Clinic comes to inform the public that, since June this year, after administrative facts that violated the rules of that clinic, Dr. Ana Paula Marques decided to terminate the service and cancel the permission to use the space for care of Occupational Therapist, so the employee’s dismissal”, says an extract from the note.

The case of mistreatment was discovered by the parents after they watched videos of the clinic, where Samia worked as a physical therapist. In the images are revealed excerpts of recordings that show the woman beating the child. In a first moment, it is possible to see her sitting in front of the boy. In some of the episodes, Samia aggressively pokes the child on the head and also pulls his hair.

The excerpts released in a video circulating on social networks take place on the following dates: May 25, 27, and June 1 of this year. The boy had been undergoing occupational therapy treatment at the clinic since February, according to his family. The aggressions were reported by the child’s mother, in July, in the 2nd Integrated Police District (DIP).

In a statement to the police, on August 8, the suspect denied hitting the child on the head and claimed that the pulling on the boy was a method called “proprioception and social sensory reinforcement”, which is part of the treatment performed with the patient.

In social networks, the Non-Governmental Organization (NGO) Association of Mothers United for Autism (Amua) issued a note of repudiation against the violence practiced by the physical therapist and asked families to be careful with the professionals who are hired to work with the development of children.

The Autism Spectrum Disorder (ASD), according to psychologist Juanita Maia, a specialist in family care, is a neurodevelopmental disorder where the child presents atypical development, deficits in communication and social interaction, repetitive and stereotyped behavior patterns, and may present a restricted repertoire of interests and activities.

The World Health Organization (WHO) estimates that there are about 70 million people with ASD worldwide, two million of them in Brazil. According to Juanit, early diagnosis of the disorder is fundamental, and the sooner treatment is started, the better the outcome for the child.

“It is essential that the treatment is done together with the whole family, because the child needs to continue with stimuli not only at school or with the professionals who accompany him, and the incentives must be adequate so that he can have a better performance. There are several treatments, but we know that the ABA [Applied Behavioral Analysis] treatment presents great results and the whole treatment is done so that the child feels comfortable and that it is pleasant, and not the opposite”, he comments.

When talking about the consequences of aggression on autistic children, the specialist highlights that they may have their development affected. According to the psychologist, the touch to relate to people, such as hugging or shaking hands, for example, are acts that are recorded in a person’s mind and form beliefs. Repetitive aggression suffered by the boy, Juanita reminds us, is harmful to him.

“A child with ASD needs to have a follow-up where we increase the stimulation and repetition for his learning. The child with ASD is not sick and can understand that the behavior is being dysfunctional and not pleasant for him, and this can lead to a delay in his development, as well as the repetition of this behavior in other environments and with other people”, she concluded.